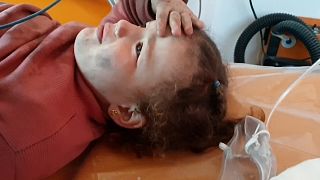 Footage from Syrian rescue workers known as The White Helmets shows them rescuing a four-year-old girl.

Sumaya had fallen down a well in the northern Syrian town of Al-Bab. She had reportedly been playing with her cousin near the well when she fell.

The rescue team took two hours to bring her to safety.

Rescue workers called out to the crying girl that they were coming and told her not to be scared.