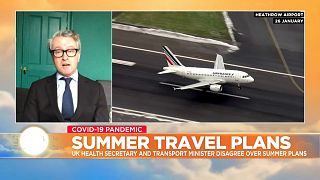 Holidays in UK and Europe: is it worth making plans?

Transport Secretary Grant Shapps sparked a furious backlash in the UK after declaring people should not be booking holidays right now – domestically or internationally.

Meanwhile, Health Minister Matt Hancock has confirmed he has already booked his summer break on the British coast.

Prime Minister Boris Johnson said earlier this month that he was ‘optimistic’ about the prospect of summer holidays, but now he's less certain.

“The vaccination rollout is going very well in the UK and starting up in Europe as well. These things are very positive moves.”

"People really are desperate to have a break,” Tipton added.