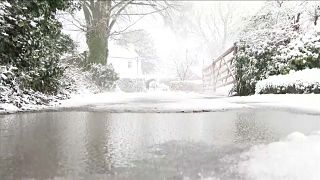 Snowstorms and freezing weather caused disruption across swathes of western Europe on Sunday night and into Monday.

Road traffic in central and northern Germany has been disrupted and train services cancelled due to the large amount of snowfall that came with the storm dubbed "Storm Darcy".

Meanwhile, the Netherlands has seen a "Code Red" alert for the first time in nine years due to the extreme weather.

Freezing temperatures continued to affect the Netherlands on Monday, leading to the closure of primary schools that were to reopen for the first time in seven weeks.

Coronavirus testing and vaccination centres also remained closed in at least eight cities across the country, hit by its first snowstorm in more than a decade on Sunday.

Heavy snowfall caused by the storm stopped on Monday, but the Netherlands is still subject to various weather warnings. It's weather service issued a rare 'Code Red' warning for the first time in nine years.

Primary schools, closed in mid-December under the most severe restrictions in the Netherlands since the start of the pandemic, were allowed to reopen on Monday.

But dozens of schools in the capital Amsterdam, the port city of Rotterdam, Utrecht and other cities remained closed, mainly because of transport difficulties, the public TV channel NOS reported.

Rail traffic, which was interrupted on Sunday, slowly resumed its course, while road traffic remained disrupted, with a motorway in the centre of the country partially closed due to snow and frost.

Treacherous road conditions over the last 24 hours have led to hundreds of vehicle crashes in parts of central and northern Germany. Police said 28 people were injured on icy roads.

Police in the western state of North Rhine-Westphalia said early Sunday they had counted 222 accidents due to the bad weather conditions since Saturday afternoon. They said two people among the 28 were severely injured.

In the western city of Muenster, among the hardest-hit places, there was so much snow on the streets that ambulances could no longer drive and all public transportation was shut down.

Authorities went through towns and cities collecting homeless people and taking them to shelters to protect them from the conditions outside, according to the DPA news agency.

Storm Darcy has also been dubbed as the 'Beast from the East part 2' in the UK.

It has left much of the east of England blanketed in snow. The storm has been caused by cold air making its way across from Russia and Eastern Europe, resembling conditions last seen three years ago.

Hundreds of residents living near rivers have had to be evacuated from their homes amid ongoing levels of high alert.

In Paris, the River Seine continues to rise. The Zouave statue at the Pont de l'Alma, a popular but imprecise indicator for flooding, is partially submerged