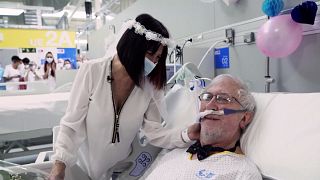 Many weddings have been cancelled due to the pandemic, but at a Madrid hospital it was the coronavirus that provided the push for two COVID-19 patients to get married.

"He had never asked: 'Do you want to marry me?'," said Rosario, a 62-year-old COVID-19 patient who was admitted to the Nurse Isabel Zendal pandemic hospital, together with her partner Fernando, some 10 days ago after they both fell ill with the virus.

Shortly after being admitted, 70-year-old Fernando popped the big question to Rosario via a Whatsapp message.

The pair had been separated for treatment in different units of the facility, with Fernando being in worse condition than Rosario.

And so, the wedding took place there and then, with a priest officiating via video call.

Nurses and doctors applauded as they kissed and placed rings on each other's hands on Thursday, Fernando in bed and Rosario in a wheelchair beside him.

Their last names were not shared with the media.

Madrid's government released a video of the wedding on Friday.

The happy celebration at the hospital took the focus away from a controversy that has marred the medical facility recently.

Named after the 19th-century Spanish nurse who took smallpox vaccination across the Atlantic Ocean, the Nurse Isabel Zendal Emergency Hospital was built in 100 days at a cost of €130 million, more than twice the original budget.

It boasts three pavilions and support buildings over an area the size of 10 football fields, resembling something between a small airport terminal and an industrial warehouse, with ventilation air ducts, medical beds and state-of-the-art equipment.

The original project was for 1,000 beds, of which roughly half have been installed so far.

ICU bed occupancy by coronavirus patients remains at a high 44%.