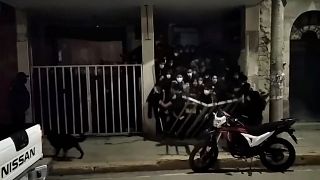 Dozens injured in nightclub stampede after police raid the venue

A stampede broke out at this nightclub in Bolivia as it was raided by police for operating illegally.

Dozens of people were injured.

Authorities said there were 150 people inside the club in the early hours of Saturday, despite COVID-19 restrictions banning mass gatherings.

Quillacollo's mayor said the owners of the club "got scared and closed the doors in an irresponsible way," which caused the human avalanche.