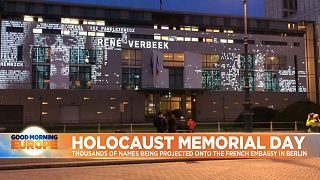 A new memorial project in Berlin, supported by Germany's culture commission and the French Embassy hopes to pave the way for remembrance culture in the digital age. Thousands of names are currently being projected onto the Embassy's facade, a symbol itself of the post-war Franco-German friendship after so many decades of enmity.

Monika Grütters is Germany's Government Commissioner for Culture & Media. She says there has been a shift in what is acceptable to articulate, and we should be wary:

"We’re experiencing more and more hatred and incitement, not only on social networks and in the digital sphere, but also here on the streets. You only have to think of attacks like in Hanau and Halle. And that’s why it’s, of course, particularly important to remember where hatred and incitement, anti-Semitism, and resentment led: to the Holocaust'.

The light installation is just the beginning of a huge crowdsourcing task to digitise millions of documents. Floriane Azoulay is Director Arolsen Archives, responsible for the project:

"The initiative 'Every Name Counts' offers a new form of remembrance culture, a way in which to renew it. In which everyone at home can collect data about a person who is a victim, and they are confronted with this person and their fate."

A quick registration online enables anyone around the world to help digitize the millions of documents in the Arolsen Archives.

Anne-Marie Descôtes is the French Ambassador to Germany:

"Yesterday I was able to record the name and data of a woman, a French woman, who lived in the same town where I was born. And you ask yourself: what happened? What’s the story behind this person? And that’s why this is a good project. It calls to people around the world. Anyone can take part and find the gateway to the bigger story."

With every year that goes by, fewer Holocaust survivors are still alive to share their stories. In the digital age “Every Name Counts” hopes to keep Germany’s memory culture alive. So that every name, every person, every victim is more than just a number.

Watch Kate Brady's full report in the player above.