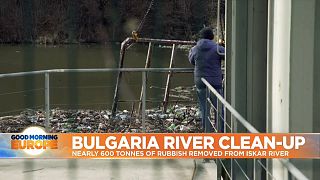 Nearly 600 tonnes of rubbish and debris removed from Bulgarian river

The floating landfill in Bulgaria has finally been cleaned up. A giant mass of rubbish clogged a dam on the Iskar river near the capital, Sofia, over two weeks ago. Nearly 600 tonnes of garbage and debris were discovered at the site.

Torrential rain carried rubbish from the capital and other nearby towns to a hydroelectric dam located 40 km away. It took regional and national authorities several days to plan technical details and find the necessary funding.

Collecting all the plastic bottles, refrigerators, tree trunks and other waste was a major task. Workers first used machines to scoop up most of it. Loose rubbish was then gathered up using hooks. A crane then had to be called in with a billboard frame used as a giant rake. Boats and heavy machinery were also used to break up and transport the rubbish. The weather was also working against the clean-up effort.

Vassil Shumanov is an employee at Svoge hydroelectric plant. He said part of the material was starting to freeze up during the operation:

"Part of this garbage started to freeze up. They were clumping together, forming large blocks. The clean-up team then has to break up these blocks and manually pull them in. The machine can then pick everything up and load it onto a lorry."

According to local authorities, 560 tonnes of garbage were transported to the nearest legal landfill. Nearly 200 cubic metres of soaked wooden debris were also picked up and stored. And as river pollution is hard to prevent they say there could be yet more tidal waves of garbage.