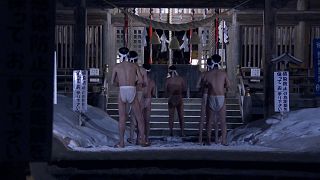 Young Shinto priests in loincloths poured icy water on themselves in a traditional ritual of purification to pray for safety throughout the year.

The annual ritual, called Daikan Misogi, is held at the coldest time of the year, based on a traditional lunisolar calendar.

Six priests took part in the ritual at Hiyoshi Shrine in Akita City, northern Japan, with the temperature outside at -2.6℃.

The men first psyched themselves up by performing a Shinto rite called Torifune, in which they shouted and moved their arms in a rowing motion again and again.

They then repeatedly threw buckets of water over their shoulders for purification.