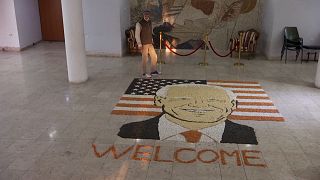 An artist in Kosovo created a portrait of US President-elect Joe Biden with grain and seeds ahead of this week's inauguration.

"I hope, with time, that I will make something much bigger because [Biden] really deserves it. He has been a major contributor in aiding the state-building of the Republic of Kosovo," the artist said.

Pozhegu worked for days at the cultural centre of Gjakova, a city 90 kilometres west of the capital, Pristina, to prepare his 3 x 2.5-metre portrait of Biden.