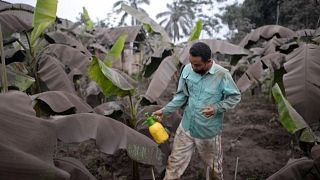 Residents from villages near Mount Semeru on Sunday morning cleaned up their houses, lawns and crops, which were covered in ash.

The volcano on the island of Java on Saturday sent plumes of hot ash and smoke into the air.

There were no reports of injuries or deaths.

It came a month after the active volcano spewed out an ash plume, prompting an appeal to around 500 people to temporarily evacuate their homes.

Indonesia is home to about 130 active volcanoes because of its position in the "Ring of Fire" - a plate belt that borders the Pacific Ocean and where frequent seismic activity takes place.