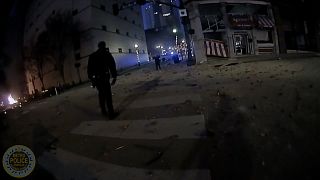 The dramatic moments immediately after the Christmas Day explosion in Nashville, Tennessee, were caught on camera by one of the police officers at the scene.

Releasing the video on Monday, Metro Nashville police said that officer Michael Sipos had been issued with his body camera only a few days earlier.

Car alarms and sirens wailed as a voice on the dispatcher calls for all available personnel and a roll call, as people stumble through the downtown area littered with glass.

While officials on Sunday named Anthony Quinn Warner, 63, as the man behind the mysterious explosion in which he was killed, the motive has remained elusive.