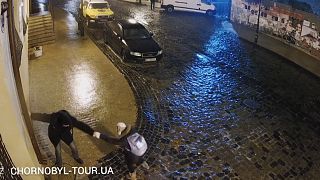 Heavy rain and sub-zero temperatures have covered the Ukrainian capital Kyiv in ice.

Videos captured in recent days have shown cars skidding on icy roads, pedestrians sliding down pavements and even a German diplomat skating to work.

The extreme weather has also left more than 170 towns in three regions without electricity, according to Ukrainian Emergency Services.