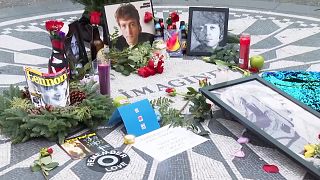 The Liverpudlian was shot and killed by Mark David Chapman on December 8, 1980, as he and wife Yoko Ono were returning to their Upper West Side apartment in Manhattan. He was 40 years old at the time.

Lennon had signed an autograph for Chapman on a copy of his recently released album Double Fantasy earlier that day.

Following his murder, Lennon's remains were cremated and his ashes scattered in Central Park.