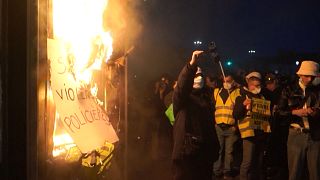 Clashes erupted and cars were set on fire in Paris as tens of thousands took to the streets to protest against the a new security law that is being considered by lawmakers in the country.

As fires blaze around the Place de la Bastille in Paris, police used water cannons and detained protesters at the end of the demonstration.

Tensions were intensified by the police beating and racial abuse of a Black man in Paris last week that shocked France.

Around 46,000 people marched in the capital, according to the interior ministry.