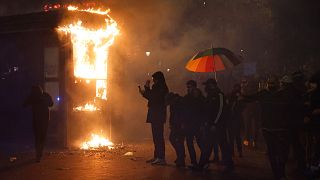 Police fired tear gas at protesters in Paris during a rally against a proposed security law that would restrict sharing images of police officers in France.

The protesters also set fires and lit flares at the demonstration, which was one of several held across the nation on Saturday.

They were echoing the concerns of civil liberties groups and journalists who have said that the planned measure would stymie press freedoms and allow police brutality to go undiscovered and unpunished.