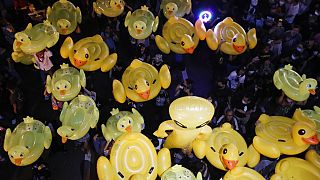 Pro-democracy demonstrators in Thailand took to the streets of the capital again on Friday, three days after the government escalated its legal battle against them, reviving the use of a harsh law against defaming the monarchy.

On Tuesday, police issued summonses for 12 protest leaders to answer charges of lese majeste, or defaming or insulting key members of the royal family.

The offence is punishable by up to 15 years in prison per incident.

Most of the protest leaders are already facing various other charges ranging from blocking traffic to sedition.

The lese majeste law is controversial because anyone - not just royals or authorities - can lodge a complaint, and it has been used in the past as a weapon in political vendettas.

But it has not been employed for the past three years after King Maha Vajiralongkorn informed the government that he did not wish to see its use. The king has not publicly commented on the law since then.

The protesters want the monarchy reformed to make it more accountable. They also want Prime Minister Prayuth Chan-o-cha and his government to step down and for the military-implemented constitution to be amended to make it more democratic.

The protest on Friday appeared largely peaceful with the crowd singing and dancing. Some protesters carried inflatable yellow ducks, a movement icon.

At least eight people were killed and six others were missing in South Korea as heavy rainfall drenched the greater Seoul region, turning the affluent streets of Gangnam into a river of submerged vehicles and overwhelming public transport systems.