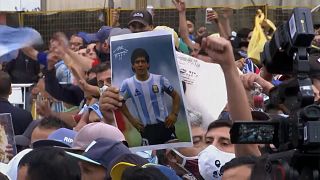 Fans mourning the death of Argentine footballer Diego Maradona scuffled with police outside Casa Rosada, where his coffin is lying in state.

The mourners pushed up against steel barriers and then brawled with riot police who pushed back against them with shields.

Maradona, who scored the “Hand of God” goal in 1986 and led his country to that year's World Cup title before later struggling with cocaine use and obesity died Wednesday at the age of 60.

His death came two weeks after being released from a hospital in Buenos Aires following brain surgery.

The office of Argentina's president said it will decree three days of national mourning, and the Argentine football association expressed its sorrow on Twitter.