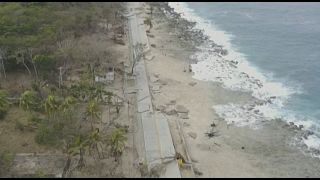 The Colombian island of Providencia, was devastated by hurricane Iota Monday, with 98% of its infrastructure "affected" and one person dead so far, according to Duque.

The President announced that ships with aid are already docked near the island of Providencia, where the comms remain down.

The small island of 5,000 people was disconnected from the rest of Colombia throughout most of the day as power lines fell and cellphone reception broke down, and officials said that they are still assessing the hurricane's damage.

Providencia is located about 250km from the coast of Nicaragua and is inhabited almost exclusively by the descendants of African slaves and British colonisers, who speak an English version of creole as their native language.

The island has no direct flights to the continent, but has become an increasingly popular tourist destination thanks to its quiet beaches and rich marine life.

On Tuesday Colombian officials said they were sending a ship with 15 tonnes of aid to the island.