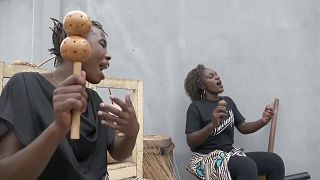 An all-female group is making music with kitchen utensils to help empower women in the Republic of Congo.

Les Mamans du Congo use giant pestles and mortars to accompany the sound of the drums, stamping feet and lyrics.

Drums, pots, pans and giant pestle and mortars — these along with stamping feet and clapping hands — make up the orchestra for Les Mamans du Congo, an all-female quintet from Brazzaville in the Republic of Congo.

The group was formed by singer, Gladys Samba two years ago as a means of empowering and educating women in the local area.

Known as Mom Glad, Samba says the independence of women goes in hand with tradition and that it's essential to put women and men on equal terms.

"The idea of creating Les Mamans du Congo group came to me through everything I do during the day," she said. "In fact, it's everyday life, everything we do in life.

"Because an African mother, especially a Congolese mother, is always forced to work every morning: doing the dishes, washing clothes, washing everything.

"To forget this suffering, we are used to singing, when we work we sing church songs and based on that I had the idea to create a show that will reflect the image of the African woman, the Congolese woman. That's why you see there are the kitchen utensils."