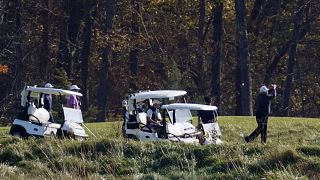 US President Donald Trump played golf and posed with a bride at his Virginia National Golf Club in Sterling, Virginia when news outlets called the presidential election in favour of Joe Biden.

Trump was notably silent for a large portion of the day on Saturday before taking to Twitter to claim that the election was stolen from him despite a lack of evidence of any fraud.

Many of the lawsuits brought by the Trump campaign have been thrown out of court, and potential recounts in states with close races are unlikely to change the number of votes.