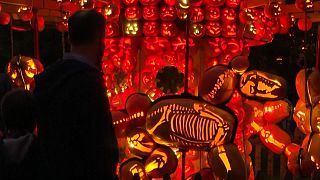 Halloween is an industry of its own in this picturesque corner of the Hudson Valley in the state of New York.

Tourists flock there seeking the spirit of The Legend of Sleepy Hollow, an 1820 story by Washington Irving about a headless horseman who haunts a superstitious schoolteacher.

But the COVID-19 has killed more than 226,000 people in the United States and is still sweeping the nation.

It's forced the cancellation of many Halloween events and haunted house attractions, where maniacal clowns and monsters terrorise visitors in the dark.

Still, Croton-on-Hudson is clinging to its major Jack O'Lantern Blaze, where more than 7,000 hand-carved pumpkins come to life for a sound and light show in the gardens of the historic Van Cortlandt mansion.

Organisers have reduced capacity by 33 per cent and aren't selling food or drinks.

But visitors, many in costume, can still stand in awe of the pumpkins, which morph into everything from a huge Statue of Liberty to a planetarium and a carousel with skeleton horses.

Not to mention a Museum of Pumpkin Art (MoPA), which features Edvard Munch's The Scream along with the Mona Lisa and a Banksy.

But this year, tourism is scaled back and most of it is local.