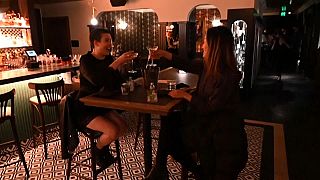 Melbourne celebrates the end of a gruelling four-month lockdown

People have been celebrating in Melbourne after coming out of a four-month lockdown.

Bars and shops have reopened in Australia’s second-biggest city, with stay-at-home orders and forced closures of so-called non-essential business coming to an end.

Victoria state was the epicentre of Australia's second wave, with an outbreak that peaked at more than 700 daily cases in August.

But the state hasn't recorded a new case or death since Monday.

Professor Nancy Baxter head of the Melbourne School of Population and Global Health at the University of Melbourne said that social distancing measures would still be in place and that it would be a long time before life in the city would be back normal.

"We are getting occasional cases where we don't know where it came from, but that is very low now.

"It's unfortunate that it took us this long into the pandemic to get our act together but it is now together. I'm as confident as I can be."

Copenhagen shooting: What do we know about the deadly shopping centre attack?