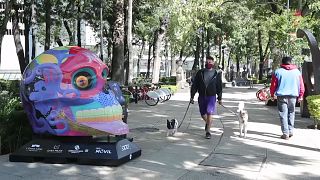 Skull sculptures have graced the streets of Mexico City as part of Day of the Dead celebrations which are being held amid the coronavirus pandemic.

Fifty large skulls have been set up along the Mexican capital's Reforma Avenue as part of an exhibition run by Mexicraneos.

With the exhibit now in its fourth year, Mexicraneos wants the event to become part of traditional festivities that are slowly transforming into a public holiday instead of the private offerings made at home to honour the dead on November 2.

This exhibition will be held until 10 November.