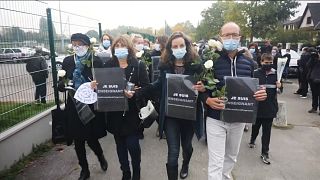 Mourners on Saturday marched near the school of a teacher who was beheaded near Paris on Friday.

One of Paty's former pupils who took part in the march told British broadcaster Sky News his history teacher was "kind" to his students.

The teacher's alleged attacker was reported to be 18 years old, of Chechen origin and born in Moscow.

Officials said he was shot dead in the neighbouring town of Éragny after he acted in a threatening manner and failed to respond to an order to put down his weapons.

Police told the AFP news agency that Paty had hosted a class discussion with secondary school students about cartoons of Islam's Prophet Muhammad.

Some Muslim parents said they had complained to the school and French media reported Paty had received a number of threats in the wake of the class.

Demonstrations were planned across France on Sunday in Paty's memory.