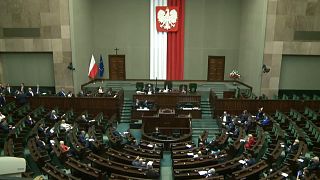 Poland's embattled government has said that its future should become clear by Friday, amid a frenetic power struggle within the right-wing coalition.

Leaders from the ruling Law and Justice Party (PiS) were due to hold talks on Wednesday to determine whether the "United Right" alliance could continue, following dissent from a minority partner.

PiS has warned that the coalition which has ruled since 2005 is crumbling and that a minority government might be formed without United Poland, the small party which sparked the current crisis by opposing an animal rights bill last week.

Earlier this week PiS chairman Jarosław Kaczyński met with the head of United Poland, Zbigniew Ziobro. Details of what was said are not known, but the main coalition partner has briefed Polish media that the PiS chief laid down conditions the smaller party must meet for the alliance to continue.

At issue was also the future of the other small coalition partner, a party led by Jaroslaw Gowin, that also failed to fully back the new legislation.

Should the coalition's collapse be confirmed, it could bring early elections. But such a vote would be highly risky for all its members.

A poll this week suggested PiS would not gain if there were early elections, while their coalition partners would likely miss out on getting any MPs elected.

The crisis began last week when Ziobro's party voted against a new animal protection law proposed by the Law and Justice party.

United Poland also said it would not back new legislation that gives immunity to state officials who disregarded the law while taking steps to counter the coronavirus pandemic.

The legislation would shield Ziobro's political arch-rival, Prime Minister Mateusz Morawiecki, from responsibility for controversial decisions taken while trying to organise a presidential election during the pandemic. Amid much chaos, the two-round election was postponed from May to June and July.

Without the 19 votes of Ziobro's party, the ruling coalition will lose its fragile majority in parliament, where it holds 235 out of 460 seats.