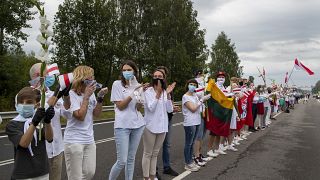 Around 50,000 people in Lithuania expressed their solidarity with those demanding democratic reforms in neighbouring Belarus.

They formed a human chain on Sunday between the capital Vilnius and Medininkai, on Lithuania's border with Belarus.

It echoed a similar event in the region more than 30 years ago.

In 1989 more than a million people joined hands across Lithuania, Latvia and Estonia calling for an end to Soviet occupation.

There has been a wave of protests in Belarus against President Alexander Lukashenko in recent weeks. It comes after he was declared the victor of elections earlier this month. Critics say the poll was rigged in his favour.