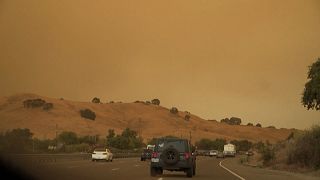 Thousands of residents fled a city in northern California on Wednesday as a series of fast-moving wildfires spread across the state, burning dozens of homes and structures.

The fire outside Vacaville, a city of about 100,000 residents located between the state capital Sacramento and San Francisco, is part of a series of blazes that have scorched nearly 50,000 acres (20,200 hectares) in the region in recent days.

Some residents of Vacaville heeded the evacuation orders dressed only in their pyjamas, as the flames surged across roadways and gas lines exploded at several residences.

Multiple people suffered burns as they ran for their lives.

Fire crews could be seen struggling to protect homes from the flames and rescuing animals, some of which did not survive.

Fire officials said the blaze was zero per cent contained early Wednesday and threatened some 1,900 structures in the area.

One woman described fleeing the inferno with her husband, who suffered burns in his car and was forced to abandon the vehicle.

The group of fires, known collectively as the LNU Lightning Complex fires and taking place as the state faces a torrid heat wave, has so far destroyed dozens of buildings or structures in several counties, including the famed wine regions of Napa and Sonoma.