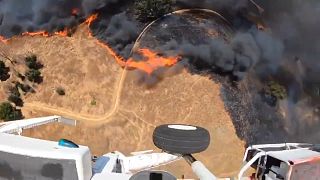 Fire departments have been on duty around the clock in an effort to contain several wildfires in Southern California.

Two of the most urgent wildfires have been labelled the Lake Fire and Ranch Fire, in Los Angeles County (LA), while a third fire, dubbed the Rock Pool Fire in the Malibu area, forced the closure of roads and campgrounds. T

he Lake Fire, the largest of the three, has burned nearly 7,500 hectares and is 31% contained as of 4pm GMT, according to Cal Fire.

Wildfires have broken out amid a heatwave California.