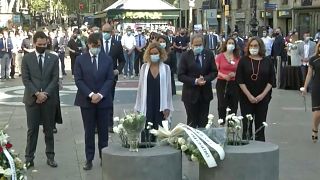 Barcelona mourns the victims of the 2017 terror attacks

Barcelona lamented on Monday, August 17, the victims of the terrorist attack that saw a van run over pedestrians on Las Ramblas, the city's most emblematic boulevard, three years ago.

In Las Ramblas, a solemn but emotional act was held with the victims as protagonists, while authorities and political representatives remained in a discreet background. In total, 16 people died after the attacks in Barcelona and in the coastal town of Cambrils, which took place just hours after the initial van attack.

Some 50 relatives of the deceased, injured and eyewitnesses to the attacks presided over the ceremony, with white carnations in hand, on the iconic Joan Miró mosaic, where the terrorist Younes Abouyaaqoub left the van after the attack.