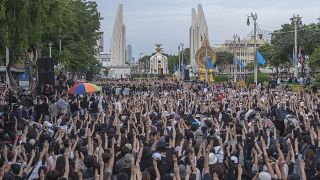 Anti-government protesters gathered in Thailand's capital on August 16 for a rally that may test whether their movement has any strength beyond the college campuses where it has blossomed.

Thousands of people assembled at Bangkok's Democracy Monument, a traditional venue for political activities. Hundreds of police were also present, as well as a small contingent of royalists opposed to the protesters.

The student-led movement has three core demands: holding new elections, amending the constitution and ending the intimidation of critics of the government.

Laws guiding the 2019 election were widely seen as so heavily rigged in Prayuth's favour that victory was all but guaranteed.

Their action was virtually unprecedented, as the monarchy is considered sacrosanct in Thailand, and any criticism is normally kept private.

A lese majeste law calls for a prison sentence of three to 15 years for anyone found guilty of defaming the royal institution.

The sensitivity of the issue was illustrated by the failure of most mainstream Thai media to report in any detail on the students' manifesto about the monarchy.

Police have arrested several protest leaders and charged them with sedition for statements made at a small rally in July.

They were released on bail and vowed to attend this rally, in what appeared to be a defiance of the terms of their release.