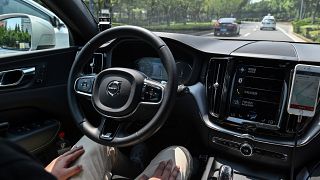 As technology companies race to put self-driving vehicles on the road, some Chinese companies are launching taxi pilot projects in cities.

It is expected to be years before cars that operate completely without humans are unleashed owing to lingering technological, regulatory, and safety hurdles.

Similar efforts are underway in the US, and AutoX's chief executive Xiao Jianxiong told AFP the first fully-autonomous vehicles could be on the roads by the end of the year.

Chinese consumers were lining up for a spin in DiDi Chuxing's self-driving taxis at a Shanghai pilot project launched in June.