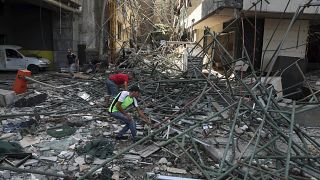 Volunteers from around Beirut worked to clean up a hard-hit residential area near the port following the massive explosion that devastated much of the city on Wednesday.

They gathered in the neighbourhood of Gemmayze where there was widespread damage and worked through the day to sweep up broken glass and clear some of the rubble.

Hundreds of thousands of Beirut residents have been left homeless.

Investigators probing the deadly blast have focused on possible negligence in the storage of tons of a highly explosive fertiliser in a waterfront warehouse, while the government ordered the house arrest of several port officials.