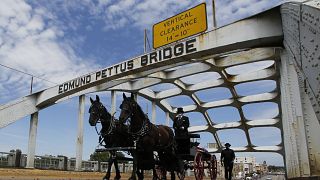 A crowd gathered near the bridge that became a landmark in the fight for racial justice when Lewis and other civil rights marchers were beaten there 55 years ago on “Bloody Sunday," a key event in the fight for voting rights for African Americans.

Lewis was a Democratic congressman and a member of the House of Representatives from Georgia's 5th District. He died on July 18 of pancreatic cancer aged 80.

He was one of the "Big Six" civil rights leaders, which included Martin Luther King Jr. He co-organised and spoke at the March on Washington for Jobs and Freedom. The same demonstration where the infamous I Have a Dream speech was delivered by Dr King.

A horse-drawn hearse retraced the route through Selma from Brown Chapel African Methodist Episcopal Church, where the 1965 march began.

As the wagon approached the bridge, members of the crowd shouted “Thank you, John Lewis!" and “Good trouble,” the phrase Lewis used to describe his tangles with white authorities during the civil rights movement.

Some crowd members sang the gospel song “Woke Up This Morning With My Mind Stayed on Jesus.” Later, some onlookers sang the civil rights anthem “We Shall Overcome” and other gospel tunes.

The hearse paused atop the bridge over the Alabama River as the cicadas sang in the summer heat.

On the south side of the bridge, where Lewis was beaten by Alabama state troopers in 1965, family members placed roses that the carriage rolled over, marking the spot where Lewis spilled his blood and suffered a head injury.

As a military honour guard lifted Lewis' casket from the horse-drawn wagon into an automobile hearse, state troopers, including some African American ones, saluted Lewis.

Lewis' body will be brought to the Alabama Capitol to lie in repose.