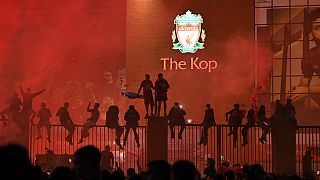 Liverpool manager Jurgen Klopp said having the opportunity to lift the Premier League trophy at Anfield meant the world to him despite having to do so in an empty stadium with fans shut out due to coronavirus.

The Reds sealed a first top-flight title for 30 years last month but had to wait until after a thrilling 5-3 win over Chelsea in their final home game of the season to lift the Premier League trophy for the first time.

Despite pleas for fans to stay away on the night Liverpool finally got their hands on the trophy, supporters crowded around the stadium even prior to kick-off, while the second half was accompanied by the constant crackling of fireworks lit by fans outside the ground.