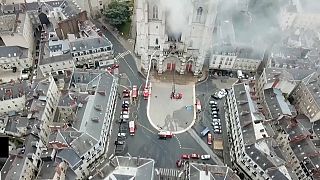 More than 100 firefighters were deployed in the western French city of Nantes on Saturday morning to tackle a "violent blaze" at the 15th-century cathedral.

The fire damaged the 17th-century organ and stained glass windows. The smoke pouring out of shattered glass windows brought back memories of the Notre Dame cathedral fire of April 2019.

The Nantes fire was soon "under control" and no injuries have been reported. The city's public prosecutor Pierre Sennès opened an arson inquiry after he revealed that "three distinct fire points" were found.

President Emmanuel Macron expressed his support to firefighters "who take great risk to save this gothic gem in the city of the Dukes".

The Cathedral of St. Peter and St Paul had already been renovated with concrete roof beams following a large fire in 1972 which had reduced the roof to ashes.

The building had been built over five centuries and completed in 1891.