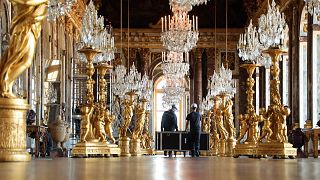 The Château of Versailles, one of the most famous palaces in the world, used to welcome no less than 10 million visitors each year, but since 13 March it has been closed due to the coronavirus pandemic.

For the first time since the confinement began a camera crew is allowed to film the glorious home of Louis XIV.

Lionel Arsac is a curator in charge of heritage. Even during the confinement he has never stopped visiting. "I have a rather strange feeling because we're in a grand place and it's getting quite melancholy," he confides. Arsac says he looks forward to the visitors' return.

Inside the castle, these days life is starting up again. "You are going to see the Hall of Mirrors as you have never seen it before," says Arsac, as all the furniture has been moved to the centre of the gallery.

The conservation team took advantage of the containment. For them, it's an opportunity to do what they never have time to do - to clean the 357 mirrors or meticulously dust off the sculpted decorations.

The organ in the chapel is holding up well, as are the 320 sculptures in the gardens.

Until 15 July the castle is closed for tourists. But the reopening is still up in the air, dependent on decision making at government and local level.