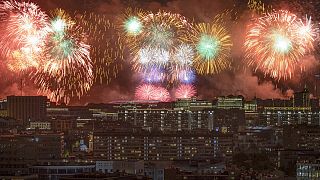 Fireworks lit up the sky during Victory Day celebrations in Moscow, Russia, on May 9. The country marked the 75th anniversary of the victory over Nazi Germany in World War II.

This year, fireworks displayed over the Sparrow Hills (Russian: Vorobyovy Gory), an area near Luzhniki stadium in Moscow.

72 firework installations and 18 cannons created more than 10,000 fireworks within 10 minutes.

Victory Day is Russia's most important secular holiday and this year's observance had been expected to be especially large because of the 75th anniversary.

But key public events including the Red Square military parade were postponed as part of measures to stifle the spread of the virus.