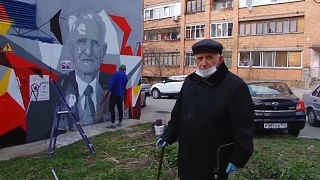 Residents of Nizhny Novgorod are celebrating the 75th anniversary of the end of the Second World War by painting portraits of war heroes near the houses where veterans live.

They are part of a project called 'Image of Victory' created by a public movement called 'Volunteers of Victory'.

Here, a portrait of 94-year veteran Vasily Rassipnov is being painted on a wall near his home.

It takes several days to complete a portrait, and artists are working round the clock to complete the project before Victory Day, which is celebrated in Russia on May 9.