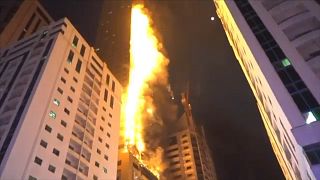 First responders rushed to face a major fire that broke out in a residential skyscraper in Sharjah, UAE, on Tuesday night.

At least 12 people were injured as hundreds were evacuated from the 48-story Abbco Tower and nearby buildings in the Al Nahda neighbourhood, according to local media sources.

Seven wounded people were treated at the scene and five others were rushed to the hospital with symptoms of smoke inhalation, local media said.

Debris and flames fell from the building, damaging vehicles parked on the street.