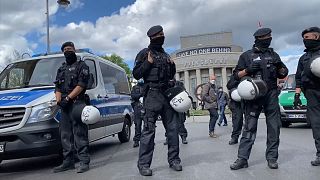 In Berlin's Kreuzberg district on 1 May, anti-capitalist demonstrators tried to gather, while 5,000 police officers were mobilised throughout the German capital to enforce the ban on demonstrations involving more than 20 people.

Police in Berlin on Friday detained several people who protested against restrictions on movement and freedom of assembly.

Although Germany in recent days has loosened its restrictions slightly – for example, allowing small shops to reopen – rules still call for people to keep a 1.5-metre (5-foot) distance from each other in public.

Gatherings of up to 20 people are allowed.

Officers blocked Rosa-Luxemburg-Platz square in Berlin, which has become a centre of recent protests.

According to the John Hopkins University, Germany has recorded over 163,000 COVID-19 cases and 6,623 deaths.