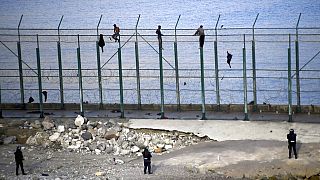 The European Court of Human Rights has backed Spain’s rapid deportation of two African migrants who tried to enter one of its north African enclaves, Melilla and Ceuta.

The court’s grand chamber ruled that there had been no violation of two articles of the European Convention on Human Rights in a test case brought on behalf of the men, a Malian and an Ivorian.

The pair crossed high border wire fences separating Melilla from Morocco in August 2014, along with a number of other migrants, but they were caught by Spanish police and immediately returned to Morocco.

EU law requires any migrant arriving — regardless of the circumstances —to be transferred to mainland Spain where they can access lawyers, translators and medical personnel. Spain previously defended that their deportations were legal under an agreement signed with Morocco in 1922.

Ceuta and Melilla are the European Union’s only land borders with Africa. Each year thousands of migrants, most of them from sub-Saharan countries, try to scale the fences to make it into Spain in the hope they won’t be returned and may get asylum.

Migrants were in 'unlawful situation'

The European court had initially condemned Spain over the two men's case and concluded that the rapid returns were in violation of the European Convention on Human Rights — but Thursday’s ruling overturned that decision following an appeal by Spain.

The appeal chamber said the migrants had “placed themselves in an unlawful situation when they had deliberately attempted to enter Spain as part of a large group and at an unauthorized location, taking advantage of the group’s large numbers and using force.”

It said “they had thus chosen not to use the legal procedures which existed in order to enter Spanish territory lawfully.”

“These people were deprived of a review of the expulsion,” said Gonzalo Boye, a lawyer who presented the original case to the court.

He points the finger at EU policies for creating a climate where this type of migrant policing exists.

“A European government has implemented this migration policy in which the southern border plays a key role to keep the migrants away from Europe,” he said. “The responsibility is not only Spanish, it’s European.”

Spain's interior ministry said nearly 32,500 migrants entered Spain in 2019 by land and sea routes, down by nearly half from 2018.

But the number of migrant drownings in the western Mediterranean remains high: 325 deaths were recorded in the first 10 months of 2019, compared to 678 for the same period in 2018.

But even as Morocco works to tackle migration via its territory, it says it will not act as Europe's police force.