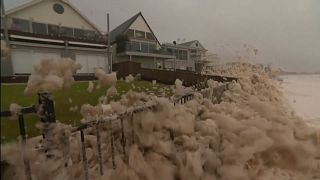 Residents along eastern Australia's coastline are cleaning up after torrential rain lashed Sydney and large parts of New South Wales state over the past several days.

Australia's weather agency said 391.6 mm of rain had fallen in the past four days in Sydney, more than three times the average rainfall for February.

About 100,000 homes are without power, and officials have warned flash flood could be life-threatening.

But the rainfall means only 17 fires are still burning across the state.