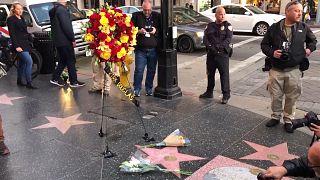 Flowers and wreaths laid on the Hollywood star of Kirk Douglas

Actor Kirk Douglas has died at the age of 103. Flowers were placed on his star on the Hollywood Walk of Fame.

Douglas, who starred in "Spartacus," "Lust for Life" and dozens of other films, helped fatally weaken the blacklist against suspected Communists and reigned for decades as a Hollywood maverick and patriarch.

Douglas earned three Academy Award nominations but never won a competitive Oscar. He did, however, receive an honorary statuette from The Academy in 1996. Douglas was honoured with his Hollywood Walk of Fame star in February 1980.