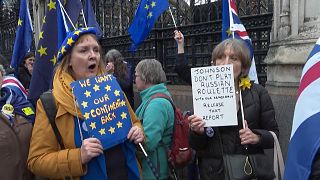 Pro-EU campaigners demonstrate as UK counts down to Brexit

People dressed in the colours of the European Union demonstrated outside the UK Parliament on the eve of Brexit.

Steve Bray, or "Mr Stop Brexit" as he is widely known, is arguably Britain's most fervent European Union supporter.

Bray has been seen taking part in daily protests outside UK parliament and famous for shouting "Stop Brexit" through his megaphone.

Dressed in yellow and blue, the colours of the EU flag, Bray has protested outside Parliament for more than three years come rain or shine.