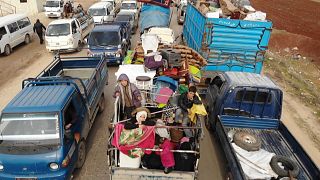 Regime forces on Tuesday recaptured most of Maaret al-Numan, a semi-deserted town of symbolic and strategic importance in Syria's last major rebel-held bastion, state media and a war monitor said.

"The Syrian army has retaken most neighbourhoods in Maaret al-Numan" and is now combing recaptured areas, said state news agency SANA, shortly after Damascus loyalists first entered the town in the northwest province of Idlib.

The Britain-based Syrian Observatory for Human Rights said that most rebels and jihadists had pulled out after regime forces stormed the town from multiple fronts earlier in the day.

It said regime forces were left battling the few fighters that remained holed-up in the area, which has been under opposition control since 2012.

Maaret al-Numan, which is nearly deserted after months of bombardment, lies on the M5 highway linking Damascus to Syria's second city Aleppo, the main artery coveted by the regime as it tries to rekindle a moribund economy.

It is also the second biggest urban centre in the beleaguered opposition bastion of Idlib.

Its recapture would bring the regime a step closer to taking full control of the wider jihadist-run bastion and the M5 highway that runs through it.