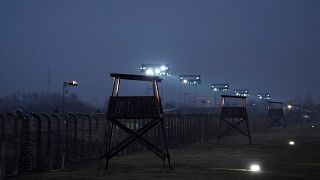 Polish president Andrzej Duda participated in a wreath-laying ceremony at the former Nazi extermination camp Auschwitz. The camp was liberated by the Red Army on January 27, 1945.

The day is now observed as International Holocaust Remembrance Day.

The Death Wall in the courtyard of Block 11 is a site where Nazis shot several thousand people there, mostly Polish political prisoners.

Between 1940 to 1945, some 1.1 million people, mainly Jews, Poles, Roma and Soviet POWs were killed in Auschwitz-Birkenau.

In 1947 the site was turned into a museum and in 1979 it was added to UNESCO's World Heritage List.

More than 200 survivors gathered to remember the liberation. Many of them lost family members in Auschwitz or other concentration camps.

Survivors walked through the place where they suffered illness and hunger. Many said they wanted to share their histories with others.