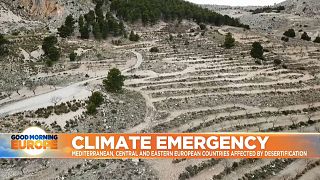 One of the less frequently heard aspects of global warming is the change to the planet's soil. Desertification has been a problem for Mediterranean countries such as Spain and Greece for some time, but it is now affecting some unexpected parts of Europe, like Hungary. Mónika Lakatos is a Hungarian Meteorologist:

"The negative effect of climate change can be seen on the extreme distribution of rainfall. Because of stronger evaporation, some regions on the planet will become more arid, while others will face a bigger risk of flooding," says Lakatos.

At the Kiskunság National Park, an abandoned water standard is a memento of a lake that was here years ago. The metres-deep water gave a livelihood to fishermen. Nowadays one of the old cottages is still standing, with a boat waiting on the dry banks outside it. Ground-water levels dropped over six metres over the last decades in this area. And despite a widespread belief, planting more trees is not necessarily the best solution to save this region's soil. Zsolt Bakró-Nagy is responsible for climate protection at the Kiskunság National Park:

"Many studies agree that planting trees increase evaporation and it lowers the level of ground-water. And it also contributes to aridification."

Climate change is potentially changing one-third of the Earth’s surface and it puts into risk the food supply of around 1 billion people across the globe.