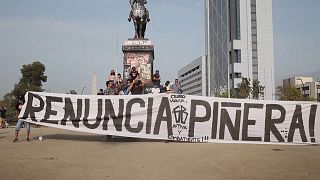 Anti-government protests continued in the Chilean capital Santiago on Friday but with fewer protesters than last year when the demonstrations began.

Twenty-six people have died in protests that were sparked by an increase in subway fares in the city and transformed into a protest on wide-ranging issues of alleged inequality.

Some 2,210 police officers have been reported injured during the protests. In addition, 188 police stations and 971 police vehicles have been damaged.