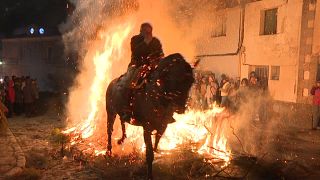 Thick smoke fills the cobbled streets of San Bartolome de Pinares as the clip-clop of galloping hooves edges ever closer to a bonfire crackling nearby.

Suddenly a horse and its rider burst through the flames as the mysterious age-old festival of Las Luminarias kicks off in this village nestled deep in snow-capped mountains near Madrid.

Some 130 horses follow suit, ridden by young and old alike, with couples, parents and children taking part in the annual ritual village historians say is unique in Spain.

The event may have originated as a pagan ritual practised by the Celts who lived in this area of Castilla y Leon more than 1,000 BC, says Salvador Saez, a 64-year-old retired teacher from the village who has researched the festival.