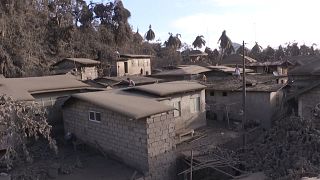 The clean-up operation has begun in the Philippines after one of the country's most active volcanos roared into action on Sunday.

More than 38,000 people were evacuated, according to the United Nations.

But the latest footage shows houses and streets covered in ash from the eruption.

The Taal eruption has been putting on a stunning and terrifying display, including an ash cloud illuminated with lightning bolts.

It shot dark-grey columns 800 metres in the sky.